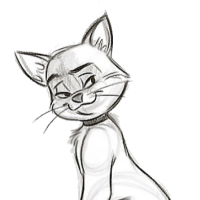 We’ve heard rumours about you fixing things for cats. Well, does this mean you can fix stuff for all cats, cats like us? Big cats like us?

Me an’ my sister, we’re two Bengal tigers, we’ve been prisoners now for over ten years in this Mexican zoo. We gotta get outta here coz we’re goin’ crazy. We just sit around all day in this miserable stinking hole, while holiday folk in their fancy hats just stand there staring with their stupid smiles. Both of us find it demeaning an’ it’s not what we’re supposed to do, we’re the top-notch of all cats an’ we got some seriously historic breeding in us.

Me, one day I’m surely gonna get myself outta here, but I’m worried about my big sister Daisy.

You gotta help us Nellie, I realise you might be shocked that two tiger cats are writing to you, that you might be frightened incase cats like us would eat you rather than hustle you for your kind assistance. Looking at your ship’s pictures, you do look kinda appetising, both me an’ my sister agree on this, but we all gotta put that kinda stuff aside. We’re at the end our tether an’ we gotta get something sorted.

We got kidnapped too, just like you, so we’re kinda on the same street as it were. I don’t wanna go into the pain of what happened ten years ago, I believe in not crying over spilt-milk, but my sister Daisy here, she don’t think like that. We been here too long now an’ she’s on the edge of goin’ crazy. Man, I think if I don’t get her outta here soon then she’s gonna die all spoozy on me in this stinking hotel zoo. She ain’t got the will no more, she just lies there pantin’ all day in the sun – an’ some days she doesn’t even eat. Nellie, I’m putting on too much weight just finishing her food.

Daisy ain’t got that long, so you gotta help. We need a plan, some sorta diversion or something. We heard you was in town, down there in the harbour someplace an’ you’re the kinda girl that can sort stuff. I heard rumours you were a boy-cat but then you changed things, if you can fix that then you’re the cat we been looking for. If you’re down there in the harbour, then you surely got some contacts an’ we wanna go over to Africa. We don’t want any of that repatriation back to Bengal shit. Man, we wanna go to Africa.

So tell us what you can come up with little Nellie, we’ll pay you something but we ain’t got much. We’re both imprisoned tiger cats an’ don’t carry much cash.

Well, you sure threw us with this one Duke. Last night, I was thinking about your situation an’ your problem breaks down into two parts, first the state of your sister Daisy’s mind an’ then this thing about you both wanting to escape to Africa. You Guys, we’re really proud of you, an’ wanna tell you that we’re gonna help you on this one – but you somehow gotta get some cash together. You also gotta sign some kinda contract that we’re gonna be safe with you two marauding hungry brutes around.

It’s nice to meet other cats who know the pain of being kidnapped. When I was kidnapped, I was only a little kitty, way too young to leave her mom. It all happened in the middle of the night, when there was thunder an’ lightening an’ screams an’ sobbing, but I found the strength an’ courage to endure. Now I’m a measly ship’s cat an’ my day job isn’t too good. But me an’ my Mexican sisters’ve got this little sideshow business goin’ helping other cats an’ we really enjoy doing it, we’re making money to get me back to England – so I’ve plenty in common with you two biggies.

First, Mildred says, in the absence of an insurance plan, you gotta be there for your sister Daisy. My real sisters in England weren’t thinkin’ one bit about me when I got kidnapped, so you gotta realise what emotional damage kidnapping can do. Does Daisy ever talk to you? Do you have the kinda relationship that family siblings should have? That’s where you gotta start things Duke, only when you an’ Daisy can talk heart-to-heart can you look under the table to see what’s hurtin’. My guess, from my own emotional experiences, is that captivity an’ a complete lack of family love is messing with her mind, maybe you’re not helping much with this Duke? An’ I think I could go deeper, I know you’re holding things back an’ you’re not telling me everything are you? Why don’t you write in again an’ tell me your horrible secret.

Now, getting you to Africa is gonna be a lot simpler than fixin’ Daisy’s messed up mind. Sure I got contacts down in the harbour, but it’s gonna cost ya loads just in middle-cat percentage fees. First we gotta break you out, which ain’t gonna be easy – two full grown tigers running loose around your four-star beach resort is gonna cause some issues. It’s not that much of a problem making the diversion, we just gotta mess around a little with the restaurant food to do this, but that cage of yours is sure something right there in the middle of the gardens. But my friends down in the harbour are working on a plan that’ll get you both out, they’re a shady crew but you gotta live with this, neither of you are in a good position to be choosy even if you are the kings of all cats. Or is that lion cats? But look, everyone here is worried about you, also if you suddenly get hungry, so we need to deal with this small contractual issue first Duke.

But me an’ my sisters wanna think about getting Daisy fixed first. We don’t wanna cannibal tiger cat with emotional issues prowlin’ around unrestrained – anythin’ could happen if things went wrong out of control. So how’s about you telling me everythin’ Duke, includin’ what happened ten years ago, about your mom an’ dad an’ how you both got to survive those difficult years together just the two of you. I suspect it’s not just Daisy who has problems – I bet some other Bengal tiger has emotional stuff mincin’ around his head too. Am I right Duke?

You gotta write to me quick now, Africa isn’t that far away when you live on a ship. I hear the wildebeest in Africa are plentiful this year, I’m told it’s gonna be a rare vintage year an’ you’d be crazy to both miss out.

So please write in an’ this time don’t hold back. I promise we’ll all be there for you – an’ could you also tell us how you gonna pay? Some kinda spreadsheet cashflow forecast or somethin?

Read more of The Ship’s Cat, the only Feline Agony Angel who makes a difference…

An’ if you’ve got a sticky feline problem that needs fixing, just you write in to Nellie Cat.

Boy, you gotta read this. This is one seriously mixed-up male Bengal Tiger…

If you wanna receive regular Ship’s Cat Feline Agony Angel blogs like this, genuine feline problems every one, then click the Follow Nellie button thing down there on the bottom left. It’s all free, you don’t have to sign up to WordPress, just register with your email address.

No cats were harmed when I made this website. An’ please think of the environment, it’s the only one we got! An’ don’t use those electronic cat-scarers in your garden.

My name is Dave, if you would like to support my hard work in creating & managing the Ship’s Cat website, you can do so by clicking the above link to buy me a coffee. Mine’s a cowboy-style Guatemalan…

This site uses Akismet to reduce spam. Learn how your comment data is processed.